Africa50’s Board of Directors reappoints Alain Ebobissé as CEO 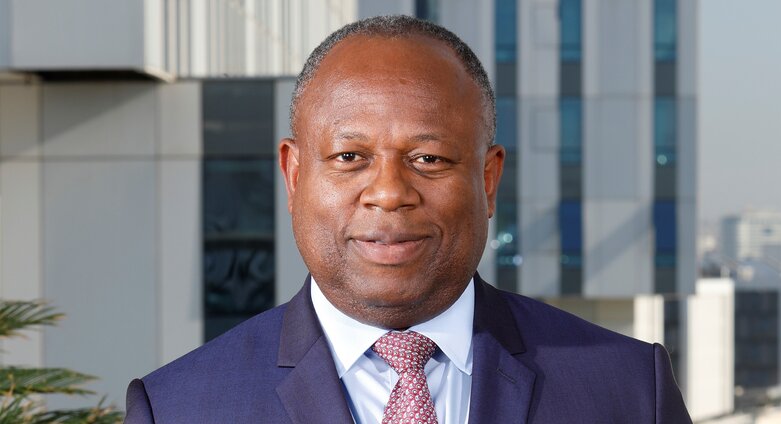 Casablanca, Monday 5 July, 2021 - - Africa50, the pan-African infrastructure investment platform, is pleased to announce the reappointment of Alain Ebobissé to serve as Chief Executive Officer of the company for a second term.

At their last quarterly meeting held in June 2021, the Board of Directors voted unanimously in favor of Ebobissé’s reappointment, expressing their satisfaction with the company’s achievements to date, and their confidence in his ability to lead Africa50 through the next phase of its strategic development and growth.

“I am delighted with Alain’s reappointment”, said Dr. Akinwumi Adesina, President of the African Development Bank and Chairman of the Board of Directors of Africa50. “Since his appointment in 2016 and through the company’s formative years, Alain has been a tremendous asset for Africa50, bringing his extensive global experience and expertise in infrastructure development to bear in shaping solid foundations that underpin Africa50’s present and future success. His leadership has been instrumental in building Africa50 into a fully operational entity with a highly skilled team of executives and professionals, a strong governance structure, a result-oriented culture, and a solid portfolio of investments, which are delivering impact and attractive returns. I commend Alain and the team for the great achievements realized so far and look forward to continuing our growth journey during Alain’s second term as CEO.”

“I am deeply grateful and humbled by the great privilege of leading Africa50 for a second term,” stated Alain Ebobissé. “It is a real honor and a very fulfilling experience for me to have had the opportunity of contributing to the growth and transformation of Africa50 since its early years of operation, into what it is today. I thank Chairman Adesina and the Board of Directors for the trust and confidence they have placed in me to carry out our shareholders’ vision to make Africa50 a leading, innovative investment platform that helps bridge the continent’s infrastructure gap. I look forward, with the support of our Chairman, our Board of Directors, and my highly experienced and dedicated colleagues, to continue to deliver on Africa50’s ambitious mandate to help accelerate the delivery of sustainable infrastructure on the continent.”

Mr. Ebobissé joined Africa50 as its Chief Executive Officer in 2016. He was formerly the Global Head for the World Bank Group’s Global Infrastructure Project Development Fund (“IFC InfraVentures”), where he led the development of and investment in several infrastructure projects in Africa, Asia, Europe, and Latin America. Prior to joining the IFC in 1998, Mr. Ebobissé held several positions in the financial services industry in France, including Deputy Head of Project and Structured Finance at Caisse des Dépôts et Consignations, based in Paris. He holds a Master of Business Administration degree from the International School for Management Development (IMD) in Lausanne, Switzerland.

Africa50 was established with a mandate to help bridge Africa’s infrastructure funding gap by investing in and catalyzing private investments in infrastructure on the continent. To date, Africa50’s investor base is comprised of 28 African countries, the African Development Bank, the Central Bank of West African States (BCEAO), and Bank Al-Maghrib.

In less than five years of operation, Africa50 has risen to become a leading pan-African infrastructure player, achieved through bringing together project co-developers and co-investors, African governments, and financial institutions from Africa and beyond, to invest in African infrastructure. It has shown its ability to support projects from the earliest development stages to completion, while also investing in fully developed projects in need of expansion. Moreover, Africa50 has become a thought leader on how to do infrastructure right, publishing studies and editorials in pan-African and global media outlets and advocating at major events.

To date, Africa50 has mobilized over US$878 million in committed capital from its shareholders. Between 2016 and 2021, Africa50 has invested in 11 infrastructure projects across 8 African countries, with an aggregate cost of projects in excess of US$5 billion. In addition to these investments, Africa50 is currently developing several projects which are expected to reach the financing stage in the near future.

Africa50 has built a diversified portfolio of investments and is developing projects in all its core sectors of energy, midstream gas, transport and information and communications technology. The company has co-developed and co-financed several solar, thermal, and hydropower plants. It is developing an important technology hub in East Africa; leveraging domestic gas resources to deliver base load power to key industries in West Africa; delivering on-grid renewable energy to people and businesses in Northern Africa; and its upcoming projects will help bridge major transport gaps in West Africa and Central Africa.

Africa50’s current portfolio of investments and projects under development include the following:

Africa50 also has a solid project pipeline which includes a fiber optic backbone project in Guinea, a rail-road bridge linking the cities of Kinshasa and Brazzaville, which will create an essential link to help develop transport corridors across the continent and facilitate the implementation of the African Continental Free Trade Area; and a transmission lines project in Kenya that is expected to become the first major power transmission public-private partnership in Africa. Recently Africa50 also expanded its key sectors to include health, education and fintech as part of its investment strategy.