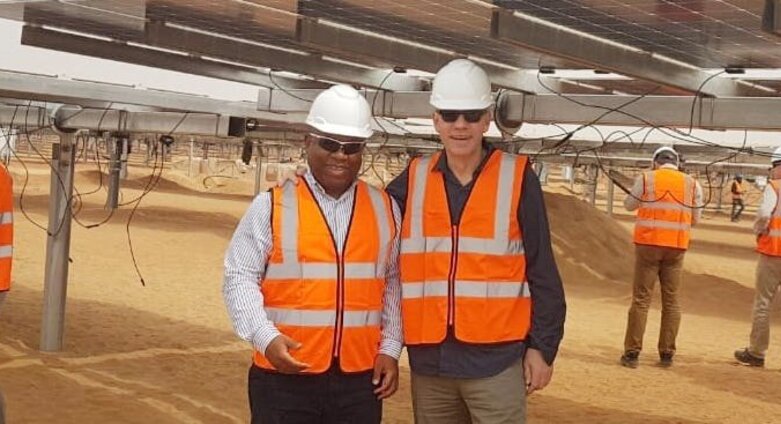 Alain Ebobissé, CEO of Africa50 (left) and Raymond Carlsen, CEO of Scatec Solar, stand in front of the solar panels of the Benban photovoltaic power plant.

Casablanca, 11 April 2019: The first tranche of the 400MW Benban solar power plant project in Egypt - 65 MW – has been connected to the grid and officially entered commercial operations.

On April 2017, Africa50 entered into a joint development agreement (JDA) with Scatec Solar and Norfund, committing late-stage project development equity funding for six photovoltaic power plants totaling 400 MW. The project reached financial close in October 2017, with Africa50 contributing 25% of the required equity to fund construction alongside Scatec Solar and Norfund. Senior debt was provided by EBRD, the Islamic Development Bank, the Islamic Corporation for the Development of the Private Sector, the Netherlands Development Finance Company, and the Green Climate Fund.

The six plants were developed under the second round of the Egyptian Feed-in Tariff Programme (FiT). They are amongst the first utility scale projects using bifacial modules which allow to produce electricity from both sides of the panels. They are also the largest contributor to the wider Benban programme, which is the largest solar park in the world, consisting of 30 plants with a combined capacity of around 1.5 GW.

Alain Ebobisse, CEO of Africa50, said: “We are pleased that the Benban project has achieved this significant milestone. Our investment in the Benban project demonstrates how we can leverage partnerships to bring large-scale power projects in Africa to fruition, using our combined project development and financing expertise. The investment supports Egypt’s ongoing reform of the power sector, which focuses on cost effectiveness, expanded and diversified generation, and increased private sector participation. It will unlock transformational change, improving people’s lives through reliable access to clean and affordable energy.”

Raymond Carlsen, CEO of Scatec Solar, added: “We have been a pioneer in Egypt since 2013 and have worked closely with the government on large-scale solar power projects to increase the share of renewable energy. Connecting our first solar power plant to the grid marks a major milestone for us. This is also our first plant with bi-facial solar panels, capturing the sun from both sides of the panels to increase the total clean energy generation”.

The partners have entered into a 25-year Power Purchase Agreements with the state-owned Egyptian Electricity Transmission Company for delivery of electricity produced by the plants. The estimated annual 870 GWh of electricity produced from the plants will avoid about 350,000 tons of CO2 emissions per year and provide energy for more than 420,000 households. The cost for the six plants, all of which should be completed before the end of 2019, stands at around $450 million.