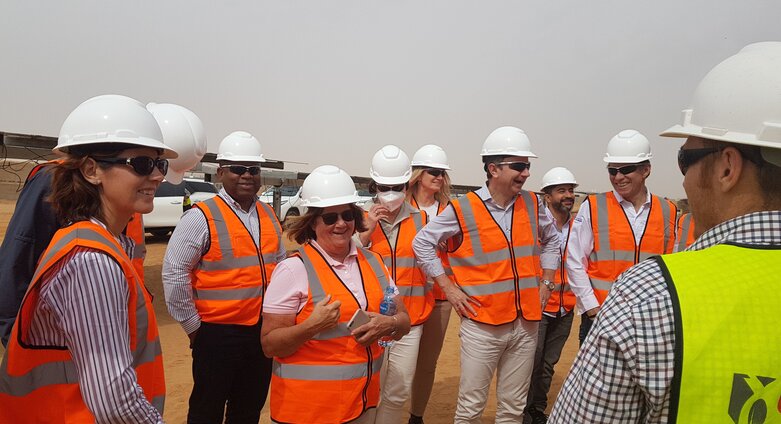 Africa50 CEO, Alain Ebobissé with executives of Scatec at the Benban site

Norwegian solar developer Scatec Solar has secured financing of $335m from a consortium of international Development Finance Institutions for the development of six solar projects totaling 400MW in Egypt.

The consortium consists of the European Bank for Reconstruction and Development (EBRD), the United Nations' Green Climate Fund (GCF), the Dutch development bank, FMO, the Islamic Development Bank (IsDB) and the Islamic Corporation for the Development of the Private Sector (ICD).

Africa50, an infrastructure investment platform established by the African Development Bank, is providing 25% equity to fund construction alongside Scatec Solar and Norfund.

The six solar projects which will be located in the Benban solar park in the City of Aswan in the country, will involve a total of $450m of investment. When completed, the Benban Solar Park is expected to generate 1.8GW of clean energy.

These six projects, when completed are expected to generate 870GWh of clean electricity, while avoiding 350,000 tons of CO2 emissions per year.

Power generated from these solar plants will be sold under a 25 year power purchase agreements with the state-owned Egyptian Electricity Transmission Company (EETC).

African Development Bank president and Africa50 chairman Akinwumi Adesina said: “This is an important milestone for Africa50. The project is the fund’s first early stage investment through its Project Development arm to be converted into a long-term equity investment made by its Project Financing arm. “This investment contributes significantly to AfDB’s High 5 priority of increasing access to power in Africa and demonstrates how Africa50 can use its capital to leverage substantial resources from other partners to fund much needed infrastructure.”