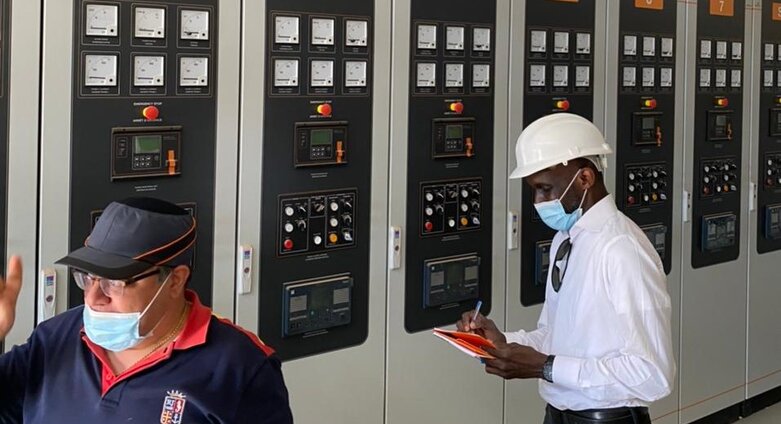 Members of the inspection team on duty

A delegation from Africa50, led by the Managing Director, Head of Project Development, Koffi Klousseh, joined Senegal’s Minister of Petroleum and Energy Aissatou Sophie Gladima, for a high-level visit to the Malicounda Power Plant project site in Senegal.

The Minister congratulated Africa50 and its partners for the quality of work and the progress so far on the project which has reached a 70% completion rate, despite constraints posed by the Covid-19 pandemic.

Malicounda is a 120 MW combined cycle thermal power plant under construction 85 kilometres from Dakar, designed to produce at least 956 GWh of power a year. It will initially run on fuel oil but is expected to be converted to natural gas when this becomes available from local fields.

This bridge loan is helping to complete the construction of the project. The project shareholders are Melec Powergen (MPG), Africa50, and Senegal’s national utility, Senelec.

About the Malicounda power plant project

The project’s total cost is estimated at FCFA 100 billion (€150 million). Construction started in October 2019 with all-equity financing, to accelerate implementation, in anticipation of raising senior debt financing later on.

Developed within the framework of Senegal’s national power sector strategic plan, the Malicounda plant is expected to produce more than 956 GWh of energy a year. The electricity generated will be sold under a 20-year power purchase agreement with Senelec and is expected to increase the country’s power generation capacity by about 17%, while reducing generation costs by about 14%.

The plant uses more fuel-efficient and environment-friendly technologies compared to older open-cycle plants. The plant is also convertible and will use natural gas once this becomes available from local fields, shifting Senegal’s energy mix from diesel to cleaner fuel.

The project has created up to 150 direct jobs while the additional energy produced is expected to increase production in the country, potentially adding up to 76,000 jobs in the long run. Construction is expected to be completed by the end of 2021.