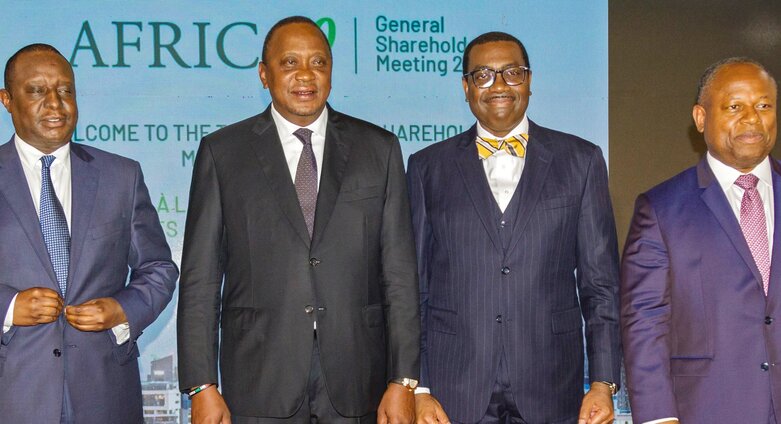 Nairobi, 19 July 2018 - President Uhuru Kenyatta of Kenya announced yesterday in Nairobi, that his country would double its shareholding in pan-African infrastructure investment platform Africa50, increasing its current investment to US$100 million.

Speaking during his keynote address at Africa50’s Third General Shareholders Meeting, he expressed his strong support for Africa50’s mission. “Kenya will double its investment in Africa50 to $100 million. We believe that this investment is justified,” he said, noting that Africa50 plans to develop a project involving the construction of 300 kilometers high voltage power transmission lines in Western Kenya that would accelerate socioeconomic development in that region.

He made an urgent call for developing and funding bankable infrastructure projects to drive Africa’s growth. “The private sector must step up and help us close the infrastructure gap on the African continent. Public funding is limited, and there are competing priorities,” he said.

In his opening remarks, African Development Bank Group President and Chairman of the Board of Africa50, Akinwumi Adesina stated, “We need to act with speed and urgency. Our people expect nothing else.” He emphasised the importance to enhance frameworks for public-private partnerships for infrastructure financing. “This is where Africa50’s role becomes very important”, he said, calling other countries that have not yet become shareholders of Africa50 to do so.

Alain Ebobissé, CEO of Africa50 thanked President Kenyatta and President Adesina for their presence and support and stressed the urgent need to bring more infrastructure projects to financial close and operation to meet the continent’s growing needs, which cannot be fulfilled by public funding alone.

He explained that given Africa50’s nimble organisation and fast decision-making process, it had the ability to respond quickly to its stakeholder needs and could deploy capital from both private and public sources, throughout the life cycle of projects, to implement projects quickly

The opening ceremony gathered African finance ministers and central bank governors, as well as business leaders from across the continent and beyond.

After the opening ceremony, shareholders convened for a closed-door session, where they reviewed Africa50’s 2017 activities, approved its financial statements and engaged the management on its long-term strategy. During the meeting Rwanda officially joined Africa50, becoming the institution’s 26th African shareholder state.

After two years of operation, Africa50 has become a key player in driving infrastructure investments with commercial rates of return in Africa, to help bridge the continent’s infrastructure financing gap estimated at US$108 billion. It has mobilised over $850 million in committed capital from its shareholders comprising the African Development Bank, 26 African countries and 2 central banks. Africa50 has made major investments in a number of shareholder countries, including Egypt (400-megawatt solar power plants), Nigeria (100-megawatt solar power plants in Jigawa State) and Senegal (120-megawatt combined cycle thermal power plant).