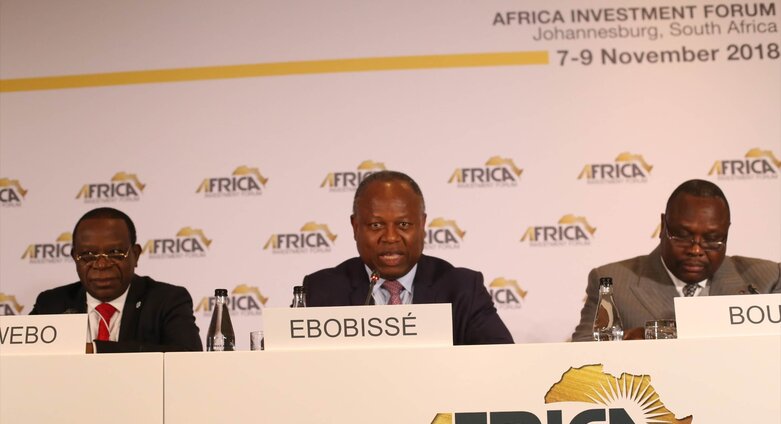 Johannesburg, South Africa, 7 November 2018 – On the sidelines of the Africa Investment Forum, the African Development Bank and Africa50 have signed an agreement with the Democratic Republic of Congo and the Republic of Congo to develop and finance the first road-rail bridge project linking their capitals – Kinshasa and Brazzaville.

Under the terms of the framework agreement, the two governments have mandated Africa50 and the African Development Bank to develop the project as a public private partnership, the bank will act as the debt provider under the aegis of the Economic Community of Central African States. As the main developer, Africa50 will lead the project development, help select a strategic partner, and provide equity for construction.

Modeste Bahati Lukwebo, Senior Minister of Planning of the Democratic Republic of Congo, added that, “The construction of this bridge will not only link to the cities, but will speed up regional integration beyond our borders. The Democratic Republic of Congo is proud to be a partner in this effort, which aligns with our vision to modernize basic infrastructure. We look forward to working with Africa50, the African Development Bank and the Economic Community of Central African States”.

This landmark project, part of the Programme for Infrastructure Development in Africa (PIDA) Priority Action Plan, consists of a a 1.575-kilometer toll bridge over the Congo River. It will include a single railway track, a double-lane road, sidewalks, and a border checkpoint at each end. It will be connected to existing road infrastructure in both countries. The cost estimated in 2017 was US$550 million.

The bridge will improve transport networks between Kinshasa and Brazzaville. Tthe two closest capitals in the world are currently only linked by ferries. Once the bridge is built, the existing traffic of an estimated 750,000 people and 340,000 tons of freight a year, is expected to increase to over 3 million people and 2 million tons of freight by 2025.

The governments of the two countries have long been working on this crucial infrastructure project, signing initial protocols in 2007, and cooperating on and co-funding the feasibility study with the African Development Bank.

The President of the African Development Bank, Akinwumi Adesina said “The idea to connect the two capitals dates back to the mid-19th century. This project is just the beginning, more will follow.”

Pierre Guislain, Vice-president: Private Sector, Infrastructure and Industrialisation of the African Development Bank added “This project is an example of what the Africa Investment Forum is about: creating partnerships between African institutions and, the private sector for transformative projects.”

Alain Ebobisse, CEO of Africa50 said, “Straddling two borders, this project presents unique and complex structuring and development challenges, requiring a robust, detailed PPP framework. This is where our expertise in project development can make a difference. With the guidance of the Democratic Republic of Congo and the Republic of Congo; and the support of the African Development Bank and the CEEAC, we are convinced that this transformative project can materialize in a few years.”