Financing infrastructure: how can the private sector take its rightful place? 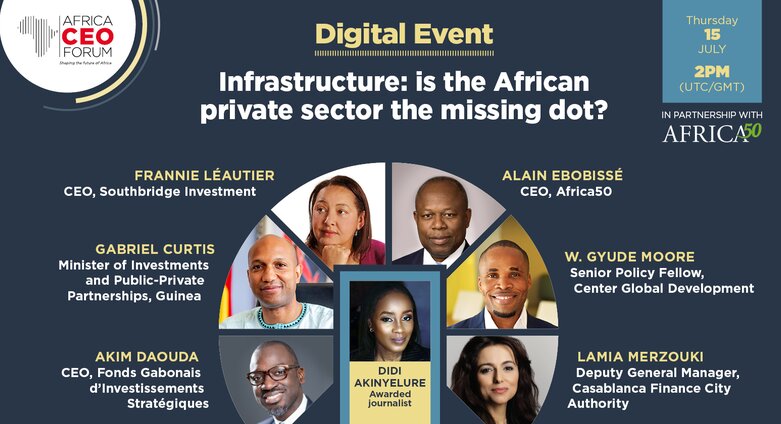 With only a 5% stake in Africa’s infrastructure projects, the potential of private sector investment is still vastly underexploited. Several renowned experts on the subject discussed the best way to mobilise private actors at a digital event organised by the AFRICA CEO FORUM on 15 July.

Private sector participation in Africa’s infrastructure projects is inadequate. This was the consensus of the panellists of the second webinar organised by the AFRICA CEO FORUM, in partnership with Africa50, the investment platform for infrastructure set up by several African governments and the African Development Bank (ADB). According to the IMF, public bodies in Africa own 95% of its infrastructure projects. As a result, investment is insufficient, scarcely covering 40% of the financing required.

Private sector, governments and institutions: the watchword is ‘cooperation’!

Fostering public/private cooperation, particularly by establishing a framework for public private partnership (PPP), is key to filling this chronic shortfall. Several African countries have harnessed the power of PPP, making it central to their infrastructure strategy. For Akim Daouda, CEO of the Fonds Gabonais d’Investissements Stratégiques, the role of these new PPPs is perfectly illustrated by the Kinguele hydropower plant project in which a 60% stake has been bought by Meridiam, a corporation specialising in public infrastructure investment and asset management, and 40% belongs to the Gabonese state. Guinea has also benefited from private investment in the energy sector, boosting its electricity supply tenfold over the last decade. Nevertheless, Gabriel Curtis, the Guinean Minister of Investment and Public Private Partnership, pointed out that despite certain success stories and the strong resolve of governments to invest in infrastructure, their debt capacity, which is vital for financing such large-scale projects, was insufficient. “We are willing to invest in infrastructure. Unfortunately, we are limited by multilateral organisations, such as the IMF, which say we can only have concessional loans”.

According to Frannie Léautier, CEO of Southbridge Investment, against this backdrop other actors must come into play, namely national banks in order to ease the debt, and institutional investors with a focus on financing. This mix, she believes, could fill Africa’s infrastructure funding gap.

“We are in the midst of a global pandemic”, said Gyude Moore, former Public Works Minister in Liberia (2014-2018) and currently Senior Policy Fellow at the Center for Global Development in Washington DC. “Everyone is purchasing online. When you order a product from a website, it has to come through a port to a warehouse and from there to a processing centre”. He believes this acceleration of online commerce should alert Africa to the growing need for infrastructure, without which the digital revolution cannot take place.

As digitisation expands into every sector, Frannie Léautier thinks that governments, which own most infrastructure, should develop innovative instruments and digital solutions to unlock value and use the ensuing capital to take more risks by building further infrastructure. However, she also emphasised the need to address environmental demands when developing infrastructure in order to ensure its resilience and endurance in the face of climate hazards.

Seeing beyond the risks

All the panellists agreed that the prime risk for private investors in African infrastructure was the one related to the project. According to Alain Ebobissé, CEO of Africa50, the core mission of which is to bridge Africa’s infrastructure funding gap, investment in Africa is “no riskier than anywhere else in the world”.

Lamia Merzouki, deputy managing director of Casablanca Finance City Authority (CFC), which operates in more than 50 African countries, shares this view. “Eighty per cent of infrastructure projects never reach the building phase. That is why the greatest challenge is having developers which take greater risks and are authorised to work on projects at a very early stages”. For Akim Daouda, fostering a better understanding of the business environment by better connecting with governments and sovereign funds is also part of the equation.

Alain Ebobissé considers that the way forward is evident: « We must attract global funds while capitalising on African resources”. The message is loud and clear!

To learn more, click here to watch a replay of the webinar, “Infrastructure: is the African private sector the missing dot?”