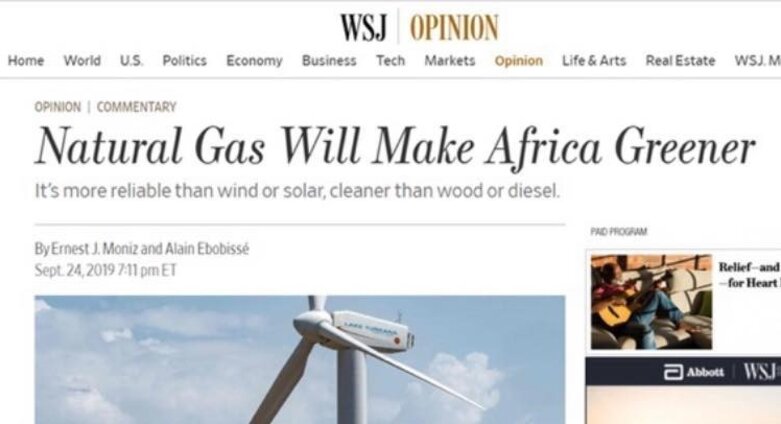 Africa’s renewable-energy projects are an important part of the global effort against climate change. But if the continent’s standard of living is going to improve, it’ll take more than windmills and solar panels.

Africa’s economy is growing, but its gross domestic product per capita remains low. A majority of sub-Saharan African countries have per capita electricity consumption of only a few hundred kilowatt hours per year—the dividing line between developing and developed countries in the U.N.’s Human Development index is 4,000 kilowatt-hours per person per year. More than 600 million Africans—roughly half the continent’s population—lack electricity. Even for households and businesses with access, the supply is too often unreliable. Blackouts can be mitigated by only expensive backup power, usually from highly polluting diesel engines.

That isn’t the only dirty nonrenewable energy source Africans use to compensate for their lack of sophisticated energy infrastructure. In the majority of countries in Africa, less than 25% of the population has access to clean cooking fuels. They instead burn wood and charcoal, which releases substantial pollution and contributes to deforestation.

Africa’s energy future necessarily includes natural gas. African countries, lacking investments and infrastructure, have yet to take full advantage of their abundant natural-gas reserves. The continent is home to 7% of global reserves and sub-Saharan Africa is estimated to have 400 gigawatts of gas-generated power potential. Sixteen countries in Africa have notable gas reserves, but only 11 have the necessary gas-fired generation capacity installed.

Expanding Africa’s infrastructure for natural gas would promote rapid industrialization and also improve its current industries. Fifteen percent of Africa’s GDP comes from agriculture—the continent’s largest economic sector—which experiences low crop yields in part because of the high price of fertilizer. Costs are so high in part because African farmers don’t have local suppliers. Natural gas is the base of many fertilizers.

African nations are committed to addressing climate change—52 of the 55 states that make up the African Union have ratified the Paris Agreement. And they do boast an impressive array of renewable energy projects. There’s the Benban solar project in Egypt with a planned capacity of 1,650-megwatts, the 310-megawatt Lake Turkana wind project in Kenya, the 4,000 megawatts of renewable energy in South Africa. Even smaller African countries are committing resources to green energy. Senegal is optimistic about getting some 25% of its energy from renewables by 2030 thanks to the several privately funded wind and solar projects.

Environmentalists in Africa and elsewhere must recognize that developing countries need access to energy and that natural gas will play an important role. Compared with the energy sources that many African countries are relying on today and may increasingly turn to tomorrow as their populations expand, a combination of natural gas and renewables is necessary for a brighter, greener future.

Mr. Moniz served as U.S. energy secretary, 2013-17, and is founder of the Energy Futures Initiative. Mr. Ebobissé is CEO of Africa50 Infrastructure Fund.