Chairman, Africa50 Board of Directors 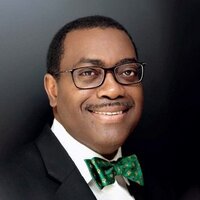 President of the African Development Bank

Dr. Akinwumi A. Adesina is the 8th elected President of the African Development Bank Group. He was first elected to the position on May 28, 2015 by the Bank’s Board of Governors at its Annual Meetings held in Abidjan, Côte d’Ivoire.

Dr Adesina is a globally renowned development economist and agricultural development expert, with more than 30 years of international experience.

Dr Adesina won the prestigious Rockefeller Foundation Social Science Fellowship in 1988, which launched him into his international career.

A bold reformer, as Minister of Agriculture in Nigeria from 2011-2015, Dr Adesina turned the agriculture sector of Nigeria around within four years. Under his tenure, Nigeria ended 40 years of corruption in the fertiliser sector by developing and implementing an innovative electronic wallet system, which directly provides farmers with subsidised farm inputs at scale using their mobile phones.

A firm believer in private sector-led growth, Dr Adesina radically changed the perception of agriculture in Nigeria from that of subsistence to a viable business that successfully attracted $5.6 billion in private sector investments.

Prior to his appointment as Minister of Agriculture, Dr Adesina was the Vice President (Policy and Partnerships) of the Alliance for a Green Revolution in Africa (AGRA), where he led several bold and innovative policy and finance initiatives that leveraged over $4 billion in Bank finance commitments to Africa’s agriculture sector.

Working with African Heads of State and Ministers of Finance, leaders in the commercial banking industry and Central Bank Governors across several African countries, Dr Adesina successfully led one of the largest global efforts to leverage domestic bank finance for the agricultural sector.

Prior to joining AGRA in 2008, he had served as Associate Director and Regional Director for the Southern Africa Office of the Rockefeller Foundation for over a decade.