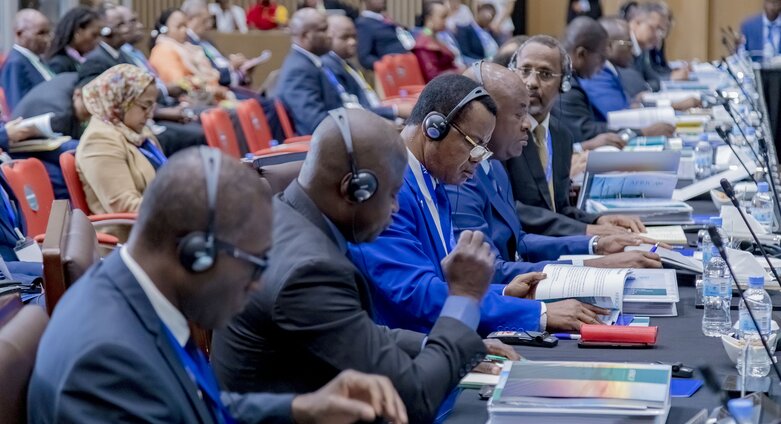 Dakar, Senegal, 12 September 2017 - Africa50, the pan-African infrastructure investment platform, held its third Shareholder Meeting in Dakar on Tuesday, September 12. President Macky Sall of Senegal welcomed the delegates. African Development Bank Group President and Chairman of the Board of Africa50, Akinwumi Adesina, gave a feature address, and Africa50 CEO Alan Ebobisse provided updates on the Fund’s investment pipeline and strategy. They were joined by finance ministers, senior officials, and ambassadors from the 23 shareholder countries and members of the business community.

In his remarks, President Sall expressed his strong support for Africa50’s mission to catalyse private sector investment, from within and outside Africa, in infrastructure in Africa, since public resources are not sufficient. Outlining Senegal’s success, he stressed that governments must improve the business climate and create an environment conducive to private investment in infrastructure, including the regulatory environment for public private partnerships. Stating that “Africa is open for business”, he stressed that the continent has defined its priorities through initiatives such as PISA, and can use Africa50 as an important new instrument. He said, “I encourage all African countries to join this fund, which is ours, to fill our infrastructure funding gap.”

Africa50 Chairman Adesina, reiterated the need for private investment to close the large infrastructure funding gap in Africa, citing growing investor interest. Looking ahead to 2025 and a projected annual funding gap of $30-40 billion, financing African infrastructure will require a balance between development finance, which can fund and de-risk early stage financing, and long-term institutional investment which can quickly narrow the funding gap. Africa50, he said, was designed by the AfDB to help blend public and private finance, and through its project development division, build up the pipeline of “bankable” projects and facilitate public private partnerships. He commended the Africa50 leadership for ramping up operations, hiring top-notch staff and consultants, and naming a respected Investment Committee. The AfDB, he assured the audience, will continue to work closely with Africa50, especially to increase access to power. Chairman Adesina also officially welcomed two new Africa50 shareholders, Guinea and the Democratic Republic of Congo. (Note: Since the last Shareholders Meeting in July 2016 Tunisia has also joined.)

Thanking Chairman Adesina and President Sall for their presence and support, Africa50 CEO Alain Ebobisse, stressed the importance of the private sector to fill the infrastructure financing gap. He cited three success factors for Africa50’s mission: the strong support of the AfDB and the shareholders, the competence and experience of Africa50’s staff, and the quality of projects, which focus on being commercially viable while having a strong development impact.